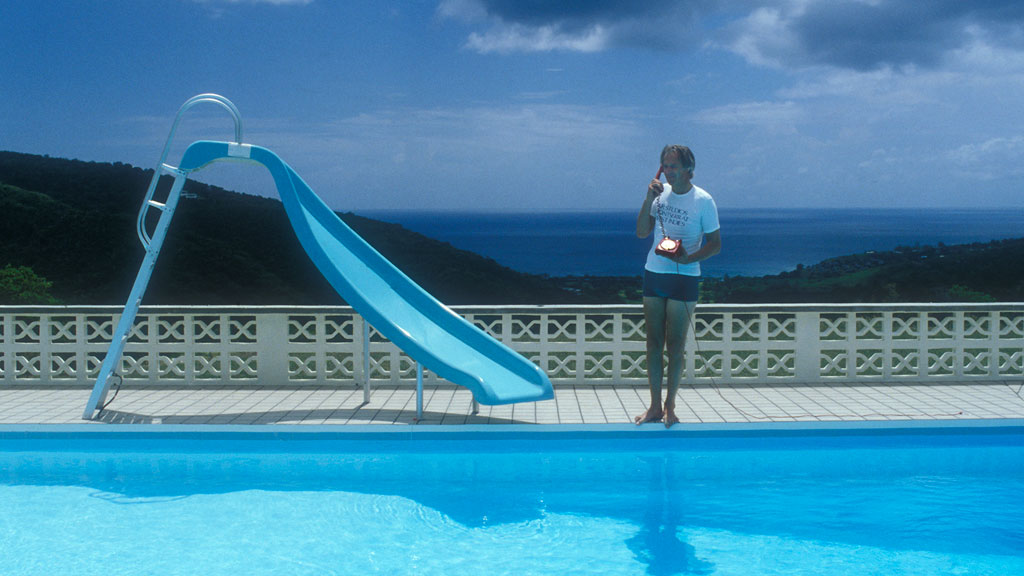 Listen to the Spotify playlist while you soak up the stories behind the music!

The Police recorded two hit albums on Montserrat, Ghost In The Machine and Synchronicity.  The recording of both albums were not without conflict, and during the recording sessions of hits such as “Every Breath You Take”, the band recorded in separate rooms – Andy Summers in the studio, Sting in the control room and drummer Stewart Copeland in the lounge room overlooking the ocean. In Under the Volcano we feature the music video of “Every Little Thing She Does is Magic”, which was filmed on the island. We also included “Roxanne”, which was recorded prior to the band’s time on Montserrat but gives the audience context of where the band was at in their career prior to heading to the island.

The Rolling Stones recorded their Steel Wheels album on the island of Montserrat and it was heralded as a major comeback upon its release. The project was the first Rolling Stones album following Mick Jagger and Keith Richard’s solo efforts, and has since been heralded as the album that patched up the relationship between the two men following their very public falling out in the mid-1980s. This album aimed to revert to the classic Rolling Stones style and was the launch of the band’s biggest world tour to date.

Both “Ballroom Dancing” and “Ebony and Ivory” are featured on Sir Paul McCartney’s third solo studio album Tug of War, which was recorded at AIR Montserrat. AIR Studios was famous for its collaborations, including the one between Sir Paul and Stevie Wonder on Ebony and Ivory. We chose to feature this song to highlight the power of musical collaborations on Montserrat. “Ballroom Dancing” is a fun track we overlaid on Sir Paul McCartney’s personal home video footage that we have in the film.

Jimmy Buffett was the second artist to record on Montserrat. For Jimmy, it was a unique combination of ingredients which helped him create his album. He selected the studio in part due to its beautiful location on the island of Montserrat, but also because of the incredible lineage of musicians George Martin had worked with. The Soufrière Hills volcano, which overlooked the Studios and was at the time considered dormant, became a central icon for Buffet and his friends during their time recording on the island. The song “Volcano” was born during the recordings and we feature this track in the film when we introduce the volcano.

“I’m Still Standing” and “I Guess Thats Why They Call It The Blues” were featured on Elton John’s album Too Low For Zero, which was recorded on Montserrat. Accompanied by successful music videos, the album produced several hit songs and spent over a year on the Billboard album chart. For the first time since 1976, all lyrics were written by Bernie Taupin, with whom John would continue working full time. It was at this time he also decided to reunite with the core members of his backing band from the early ’70s: Dee Murray, Nigel Olsson and Davey Johnstone. We decided to also feature “Bennie and The Jets” as a way to introduce the audience to Elton’s section in the film and finish his time on the island with “Your Song”, as we reflect on what the island meant to him.

“Turn It Into Something Good” is a track featured on Faces, Earth Wind and Fire’s tenth studio album which was recorded at AIR Studios and released in 1980. We decided to feature “Boogie Wonderland” to introduce the audience to the band through one of their fabulous hit tracks.

Seven and the Ragged Tiger, recorded at AIR Montserrat, is the third studio album by English new wave band Duran Duran released in 1983. The album features hit song “The Reflex”, which is in Under the Volcano. The music video for Rio was also filmed at the neighbouring island of Antigua and we play that video in the film to introduce the audience to Duran Duran.

“Walk of Life”, “Money for Nothing” and “So Far Away” were recorded on Montserrat by the Dire Straits as part of the Brothers in Arms album. Released in 1985, it was the fifth studio album by the band and it charted at number one in several countries. The album has sold more than 30 million copies worldwide and won a Grammy Award in 1986 for Best Engineered Album, Non-Classical, the 20th Anniversary Edition won another Grammy in 2006 for Best Surround Sound Album, and also won Best British Album at the 1987 Brit Awards. The hit of the album “Money for Nothing” features Sting on vocals, who was also holidaying on the island at the time.

Dubbed “fifth member” of The Beatles, Sir George Martin was one of the music industry’s most talented and legendary producers. As an Oscar-nominated composer and founder of AIR Studios he produced a record-breaking 30 number-one singles in the UK and was recognised by the industry with five Grammys and two Ivor Novello Awards. We feature “The American Sketches” in Under the Volcano to introduce the audience to Sir George’s ability to not only produce music but also his extraordinary ability as a composer.

Montserrat was also the home of superstar Arrow who recorded ‘80s red-hot hit “Hot, Hot, Hot”. The song introduces the audience to the island of Montserrat in Under the Volcano.

The band America was long time collaborators with Sir George Martin. We feature film song in Under the Volcano when we are discussing the music industry in the 1970’s.

Under the Volcano is screening at the 68th edition of the Sydney Film Festival in November. Find out more here.