Meet Me in the Bathroom

Directed by Dylan Southern, Will Lovelace
2022
UK
105 minutes
Unclassified 15+
Book Tickets
Save more with a Flexipass
A pulse-pounding love letter to the ’00s New York postpunk scene packed with interviews and live footage of the Strokes, the Yeah Yeah Yeahs, Interpol and LCD Soundsystem.
Based on Lizzy Goodman’s acclaimed book of the same name, this doco explores the debauched highs and depressed lows of the grassroots indie scene that exploded out of New York’s seedy clubs at the turn of the millennium. Despite only middling success in the mainstream, these bands – also including the Rapture, the Moldy Peaches and TV on the Radio – have become hugely influential the world over. Check out the home-video footage of rehearsals and early performances and share intimate moments with Karen O, Julian Casablancas and James Murphy in their pre-fame years. It’s not all a party though; the collective trauma of 9/11 and its impact on New York’s culture is a recurring theme.

Celebrate the film with an event at The Hub. Join us for a celebration of NYC's early 2000s underground music scene – The Strokes, Interpol, Karen O and more at Meet Me at the Hub, Sunday 12 June at 8pm. 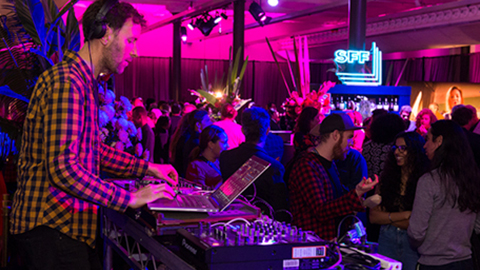 Meet Me at the Hub

Event If Meet Me in the Bathroom has got you in the musical mood, join us for a celebration of NYC's early 2000s underground music scene with Frankie's Pizza DJ Azaria Bryne playing The Strokes, Interpol, Karen O and more!
Cart
Clear Cart