It Is in Us All

Directed by Antonia Campbell-Hughes
2021
Ireland
92 minutes
Unclassified 15+
Book Tickets
Save more with a Flexipass
Masculinity and self-destructiveness are explored in Irish actor Antonia Campbell-Hughes’ beguiling debut, a thriller set against the atmospheric backdrop of Donegal.
A fatal car crash on the misty highways of Donegal brings together two survivors – slick London businessman Hamish and teenager Evan, who initiates an uncanny friendship with the older man. Hamish, who has inherited the home of his late aunt, had planned to visit Ireland only briefly. But his stay is prolonged by this tense entanglement with Evan and an unspeakable attachment to the land where his mother was raised. Antonia Campbell-Hughes’ directorial debut is a moody capsule of hyper-masculinity, grounded by the palpable, bottled-up agony of lead actor Cosmo Jarvis (Lady Macbeth).
The potent screen presence of Cosmo Jarvis is put to effective use.
Wendy Ide, Screen International
A darkly provocative and promising debut mood-piece from Campbell-Hughes. Perhaps it takes a woman to be this curious and cool an observer of the mysteries and miseries of men.
Jessica Kiang, Variety

Feature A woman tries to free the soul of her stillborn child in Laura Samani’s hypnotic debut. This aching fable explores motherhood, mysticism and grief. Cannes 2021. 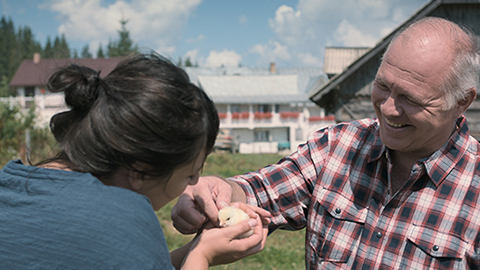 Documentary Drawing on the diaries of American novelist Patricia Highsmith, an intimate portrait of the brilliant writer of screenplay-ready stories whose own gay desires were repressed.